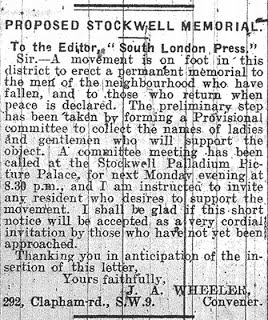 On 29 October 1918, this letter from Mr. J. A. Wheeler, appeared in the South London Press

PROPOSED STOCKWELL MEMORIAL.
To the Editor, “South London Press.”
Sir. – A movement is on foot in this district to erect a permanent memorial to the men of the neighbourhood who have fallen, and to those who return when peace is declared. The preliminary step has been taken by forming a Provisional committee to collect the names of ladies and gentlemen who will support the object. A committee meeting has been called at the Stockwell Palladium Picture Palace, for next Monday evening at 8.30 p.m. and I am instructed to invite any resident who desires to support the movement. I shall be glad if this short notice will be accepted as a very cordial invitation by those who have not yet been approached.
Thanking you in anticipation of the insertion of this letter,
Yours faithfully.
J. A. WHEELER
292, Clapham-rd., S.W. 9.
Convener
Continue reading the story of how the Stockwell Memorial was built