The committee appeals for funds to complete the project. To help the money-raising efforts, the committee suggests that benefactors donate for particular parts of the structure or donate items themselves. This article appeared in the South London Press on 12 November 1920. 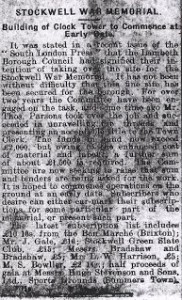 It was stated in a recent issue of the “South London Press” that the Lambeth Borough Council had signified their intention of taking over the site for the Stockwell War Memorial. It has not been without difficulty that this fine site has been secured for the Committee have been engaged on the task and some time ago Mr. Thos. Parsons took over the job and succeeded in unravelling the threads and presenting an acceptable title to the Town Clerk. The funds in hand now exceed £2,000, but owing to the enhanced cost of material and labour, a further sum of about £1,500 is required. The Committee are now seeking to raise that sum and tenders are being asked for the work. It is hoped to commence operations on the ground at an early date. Subscribers who desire an either ear-mark their subscriptions for some particular part of the memorial, or present such a part.