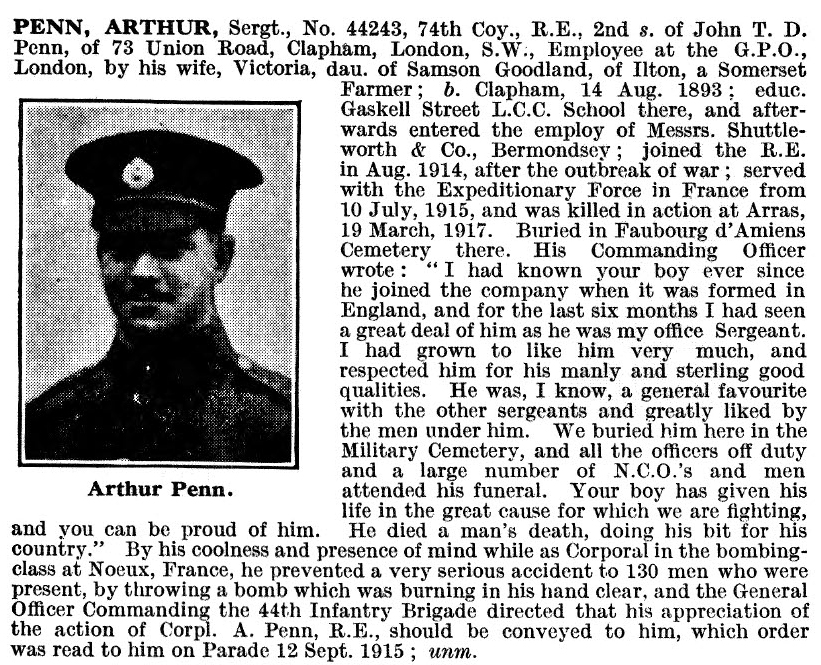 PENN, ARTHUR, Sergt., No 44243, 74th Coy., R.E., 2nd s. of John T. D. Penn, of 73 Union Road, Clapham, London, S.W., Employee at the G.P.O., London, by his wife, Victoria, dau. of Samson Goodland, of Ilton, a Somerset Farmer; b. Clapham, 14 Aug. 1893; educ. Gaskell Street L.C.C. School there, and afterwards entered the employ of Messrs. Shuttleworth & Co., Bermondsey; joined the R.E. in Aug, 1914, after the outbreak of war; served with the Expeditionary Force in France from 10 July 1915, and was killed in action at Arras, 19 March 1917. Buried in Faubourg d’Amiens Cemetery there. His Commanding Officer wrote: “I had known your boy ever since he joined the company when it was formed in England, and for the last six months I had seen a great deal of him as he was my office Sergeant. I had grown to like him very much, and respected him for his manly and sterling good qualities. He was, I know, a general favourite with the other sergeants and greatly liked by the men under him. We buried him here in the Military Cemetery, and all the officers off duty and a large number of N.C.Os and men attended his funeral. Your boy has given his life in the great cause for which we are fighting, and you can be proud of him. He died a man’s death, doing his bit for his country.” By his coolness and presence of mind while as Corporal in the bombing-class at Noeux, France, he prevented a very serious accident to 130 men who were present, by throwing a bomb which was burning in his hand clear, and the General Officer Commanding the 44th Infantry Brigade directed that his appreciation of the action of Corpl. A. Penn, R.E., should be conveyed to him, which order was read to him on Parade 12 Sept. 1915; unm.

In 1911 Arthur Penn, one of five children of John Thomas Doody Penn, a Post Office sorter, 53 from Chatham, Kent and Victoria Penn, 55, of Ilton, Somerset, was working as a chauffeur. Three children, all born in Clapham, lived at home in 5 rooms at 73 Union Road: Arthur; Daisy Penn, 26; Dora Victoria Penn, 20. A boarder, William Drowley, a single 21-year-old auctioneer’s clerk from Ringwould, Kent, boarded with the family. The family is found at the same address in 1901. In 1891 they lived at No 100 Union Road, and in 1881 they were at 6 Richard Street, Lambeth.