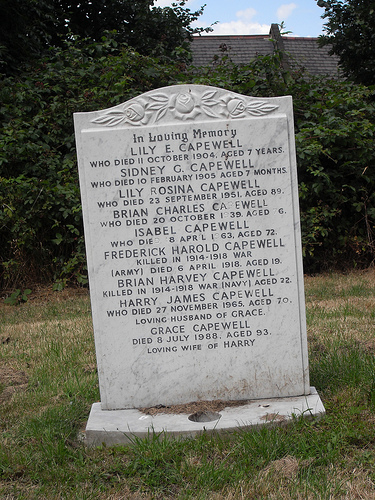 Information from the Great War Forum

The Q boat “Vala” was sailing from Milford Haven to cruise between the Fastnet and the Scillies, she was one day out when last heard from. When she never returned to Queenstown, Q Ship Heather went to search for her in the Bay of Biscay. On 7th of September the German Government announced by wireless that the former English Steamer Vala had been sunk by a U-Boat (UB.54) . Commander Leopold A. Bernays CMG was in command.

In 1901 Brian Harvey Capewell was living with his family at 68 Paradise Road, Lambeth. By 1911 they had moved to 24 Union Road, London SW4 where they had 7 rooms.

In 1911, Brian’s father, Brian Charles Capewell, was a 47-year-old master plasterer born in Finsbury. The headstone states that he died on 20 October 1939, aged 76.