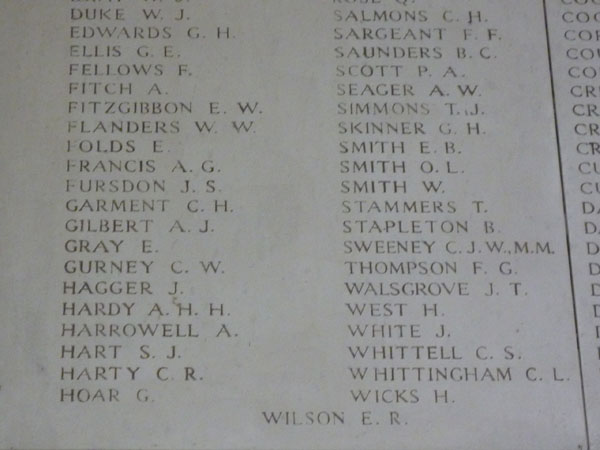 Claude Lionel Whittingham joined the Army as a Private on 10 December 1914. He was attached to the 1st London General Hospital of the Royal Army Medical Corps (the military extension of St. Batholomew’s Hospital). The hospital was stationed at St. Gabriel’s College (photo) on Cormont Road, Camberwell (a requisitioned residential training college for women teachers). The whole of Myatts Fields Park itself was closed to the public until 1921 due to its use as a hospital.

By September 1915 Whittingham was serving on the H.M.H.S “Aquitania,” converted in the previous month to a hospital ship (she started life as a luxury liner, was requisitioned as first a Royal Navy ship, and then became a troop ship). With 4,182 beds the “Aquitania” was the largest of 71 hospital ships used during the First World War. Whittingham served as an orderly on the ship until March 1916, when he joined the war effort in Gallipoli, the scene of Winston Churchill’s doomed attempt to open up a new front in order to confuse and exhaust the enemy. We do not know what Whittingham’s role was in this theatre of war but it is likely that he continued to serve in some capacity on the “Aquitania”. He returned to England on 7 May 1916.

On 19 July 1916, while based at Home, Whittingham requested a transfer to the 3/5th London F.A. Brigade “for the purpose of serving abroad”. It is not clear from the records what happened to this request. In any event, Whittingham was transferred first to the Essex Regiment and, on 9 September, to the Hertfordshires. He was posted to France on 4 November and missing in action on 31 July 1917. Later he was presumed dead.

In civilian life Claude Lionel Whittingham was a grocer’s clerk. When he joined up he was described as 5 feet 6 inches, 9 stone, with a 33 inch chest that he could expand by 2half inches, a fair complexion, with grey eyes and “reddish” hair. By the time he  transferred to the Hertfordshires he had grown three inches in height and in chest measurement. His military character was described as “very good”.

After he died, Whittingham’s mother wrote to the Records officer at the Hertfordshire Regiment to query why her son’s RAMC rather than his Hertfordshire service number was set on the medals. The polite but clipped reply was that the number used is the number “your gallant son” held on first disembarkation in a theatre of war.