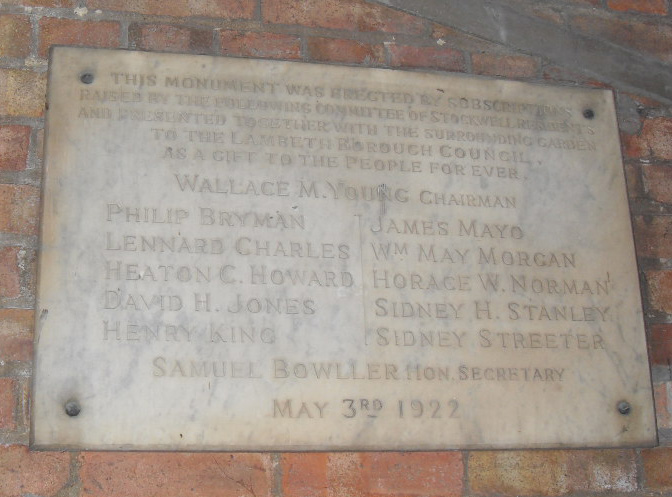 The memorial houses a marble plaque commemorating the committee who raised – by public subscription – the considerable for the building of the memorial.

This monument was erected by subscriptions raised by the following committee of Stockwell residents and presented together with the surrounding garden to the Lambeth Borough Council, as a gift to the people for ever.

and it lists the names.

Wallace M. Young, Chairman (1886-1958)
Young went to Mill Hill School in north London from 1897. The 1911 census records him as a 24-year-old surveyor living with his father, Douglas Young, a surveyor, auctioneer and estate agent, and mother and sister, a boarder and two servants at “Stathallen”, Croham Park Avenue, South Croydon. Both he and his sister were born in Lambeth. Posted as 2nd Lieutenant, then Captain Royal Engineers Inland Waterways & Docks Company to Salonika. Promoted to Captain. Awarded military MBE. In 1922 his address was 14 Stockwell Park Road, S.W.9. He was later a surveyor of the City of London.

Philip Bryman (1876-1931)
Philip Bryman, born in Whitechapel, east London, was the son of Woolf Bryman, a tailor, and his wife, Hannah, Jews who came to London from Prussia. The 1911 census records Philip Bryman as a 35-year-old merchant tailor living with his wife, two young sons and a live-in servant at 1 Studley Road, Stockwell. In 1919 the South London Press reported that a proposed design for the memorial by Norman Tyrrell could be viewed in Bryman’s shop window in Stockwell Road.

Lennard Charles (c 1871-1933)
Lennard Charles was born in Manchester. In 1901, aged 30, he was living with his wife Rosina at 225 Brixton Road and working as a house property dealer. Ten years later, listed as James Thomas Charles, he was at 33 Belle Vue Gardens, Clapham Road.

Heaton C. Howard (1855-1923)
Born in Kirkham, Lancashire. In 1911 Dr Heaton Clark Howard, M.R.C.S., L.R.C.P. (London), lived with his wife and sister-in-law, a boarder and two servants at 281 Clapham Road. Howard wrote a book titled The Therapeutic Value of the Potato, published in 1914. An article published in the Kilmore Free Press on 14 August 1919, described Dr Howard’s theories: “He had discovered a substance capable of, giving ‘prompt relief from pain, acute or sub acute,’ and also able to bring about ‘rapid absorption of the fluid in cases of synovitus’ (e.g., water on the knee). ‘These results,’ he continues, ‘so unexpected when the investigation was commenced, have been so constant and so thoroughly tested in the many cases under my care that I now feel justified bringing them before the medical profession.” Clark was an Honorary Surgeon of the St Johns Ambulance. He is buried at Norwood Cemetery.

This obituary notice appeared in First Aid in April 1923:

‘Dr Howard was born in Lancashire in 1855 and took his medical degree in 1880. The cyclist division of the old Metropolitan Corps was founded in 1889 by Mr Alan Palmer in conjunction with Dr Howard, who was appointed its Hon. Surgeon. The late Dr Howard carried on practice in Stockwell, where he was known as the friend of the poor. His surgeries in Clapham-road and Wandsworth-road have been for years the refuges of the sick, the outcast, and the distressed, while the pauper and the orphan knew that the brave old man would respond to their call at any hour of the night. Dr Howard fell victim to blood poisoning and died in St George’s Hospital where he had been a student 43 years before.’

He is buried at Norwood Cemetery.

James Mayo (born c 1872)
This is probably James Mayo, a builder who in 1911 (aged 40) was living with his wife Emma and daughter Violet in five rooms at 2 Union Road Clapham.

Wm [William] May Morgan (born c 1880)
In 1911 31-year-old Bermondsey-born William May Morgan lived at 67 Upper Kennington Lane with his wife Ethel and two young children, Douglass and Gwendoline. He was an assistant manager of a “cinematograph department (stores)”.

Horace W. Norman (c. 1872 – probably 1947)
Builder. In 1911 was living with his wife Margaret at 329 Clapham Road and two-year-old son Alan. Until 1916 was in businesss with Hubert Payne as Payne and Norman, “Builders, Decorators,
Sanitary Engineers, and House Agents”, at 324 Clapham Road. There was another Horace W. Norman in Lambeth in 1911 – 10 years younger and a commercial traveller living at Shakespeare Road, Herne Hill, who is a less likely candidate.

Sidney Streeter (born c 1875)
The only likely candidate I can find in the 1911 census is Southend-born Sydney Streeter, who was a fruiterer’s assistant, living at that time at 8 Kay Road with his wife Hettie and seven-year-old son Cyril.

Samuel Bowller, Hon Secretary (born c 1873)
In 1911 Samuel J. Bowller, a watchmaker, lived at 282 Clapham Road with his wife, two daughters and a live-in servant. One small snippet of information about him appeared in the Hawera & Normanby Star (New Zealand) on 17 June 1922, only six weeks after the Memorial was unveiled (it is irrelevant to the War Memorial but neverthless interesting).

DAYLIGHT JEWEL RAID
Escape by Motor-car
A gang of men stole diamond rings of the estimated value of £500 from the window of a South London jeweller recently, and made a thrilling escape by motor-car. The raid, which occurred at a time when there was considerable traffic, was made upon the shop of Mr. Samuel Bowller, 282 Clapham Road, Stockwell.A half-brick wrapped in newspaper was used to smash the plate-glass window and the thieves hurriedly scooped up the loose jewellery within reach. In their hurry the raiders dropped a diamond ring worth £98 on the pavement, and it was restored to Mr. Bowller by the finder. Two other diamond and platinum rings, each valued at more than £100, were knocked to the bottom of the window. The most valuable ring among those stolen was worth £50.One of them [the thieves] narrowly missed capture by Constable Stanton. “I was off duty,” the policeman said, “and was shopping a few doors away. As I came into the street carrying my little boy, I saw a man running. I sat the child down on the pavement, and but for the delay I should have caught the man. As it was, I got close to him, and he jumped on the motor-car, which was moving by this time, and climbed over the shut door into the back seat.

“I just touched the car; but he aimed a blow at me with a stick, and then, putting on speed, the car shot away. The car contained three men, besides a chauffeur in uniform.”

For a period variously calculated at an hour, the car stood at the corner, quite close to the shop, without attracting especial attention. Indeed, one of Mr. Bowller’s assistants joined the chauffeur in smiling at a funny incident which the two of them had witnessed.

The car used by the thieves was a Ford, and bore the identification plate XH7431. The police are in possession of good descriptions of the four men, who are believed to be experts at this particular form of robbery.