WINTER, E.E., L/Cpl., King’s Royal Rifle Corps.
Having volunteered in August 1914, he was drafted to France in January of the following year and took part in the fighting at Neuve Chapelle, Hill 60, Ypres, Festubert, Vermeiles, Vimy Ridge and the Somme. He was reported missing on the Somme on August 24th, 1916, and was presumed to have been killed in action on that date. He was entitled to the 1914-15 Star, and the General Service and Victory Medals.
“Great deeds cannot die.” 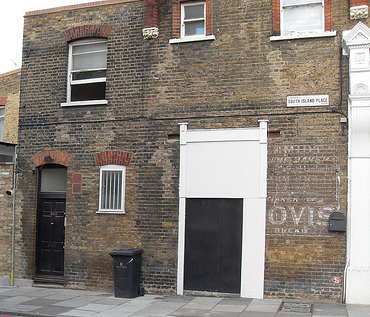 Traces of the Schmidt bakery on South Island Place

It was easy to find Edward Ernest Winter in the Soldiers Died in the Great War database, the Commonwealth War Graves Commission database and the National Roll of the Great War.

However, he did not seem to exist in the 1911 census. I thought he was probably not related to Bertram Horace Winter, as I had not seen the name Edward in any of the censuses for his family. Before I gave up, as sometimes you have to, I searched the 1911 census for 49 Kimberley Road, the address quoted in the National Roll of the Great War, to see if he was living at that address before the war, but there was no trace: the house was occupied by the Gibsons and the Weingartners.

I gave that up and searched for Winter in the National Archives British Army WWI Service Records. I was lucky – his file had survived the Luftwaffe attack on the building where the records were housed in the Second World War and the subsequent dowsing from the Fire Brigade. And they contained a surprise. Edward Ernest Winter, a single man, was required to supply his next of kin. He named his brother Charles Winter but could not give an address for him. Form 5080, on which the next of kin was required to list all family members, included only two: Sarah Ellen Winter, his 78-year-old mother, and Vera Winter, his sister, with no address for either of them. A signature, usually of a minister of religion, was required but the form was unsigned. I wondered what kind of disconnected life Edward Winter had led.

The next record had a clue. The Effects Form – 118A showed that Edward Ernest Winter was previously known as Weingartner. They had lived at 49 Kimberley Road since at least 1901.

Many families with German names changed their names at this time. Between 1850 and 1910 over 4 million Germans had left their country, many of them headed for America but a sizeable proportion settling in England, primarily in London. In 1911 Lambeth had a population of over 1,000 Germans, and that was not including second generation. Edward’s father, Charles Weingartner, an assistant in a grill room who had emigrated from Vienna, had died some time between the 1891 and 1901 censuses. Mary Ellen and her children bore his name and feared the hostility it would attract. They were, perhaps, sensible to take action.

By the time Edward enlisted on 12 July 1915, South London had experienced bitter anti-German riots, with a wave in October 1914 against businesses and buildings believed to be German-owned, and followed by widespread aggression after 1 May 1915, when the passenger ship “Lusitania” was attacked without warning and sank within minutes. The 1911 census shows widow Amelia Schmidt, 48, and her son William Henry, 24, living at their bakery shop at 66a Brixton Road. They changed their name to Willson, but the traces of their business can still be seen in South Island Place.

The government, fearing the volatility of the population who were suffering hardship and food shortages, not to mention the slaughter of their men, did not want insurrection of any kind and the courts came down hard on rioters. In addition, some with German-sounding names must have felt confident enough to keep them, There are several on Stockwell War Memorial: for example Leonard George Henry Erdbeer, Bertie Hoft, and Ernest Frederick Oehring.

We cannot know whether anxiety about the discovery of his brother Charles’s Germanic surname stopped him from giving details to the recruitment officer. Perhaps Charles had not yet changed his name. In 1911 he was working as a restaurant cook and living with his wife and children at 84 Coverton Road, Tooting. Edward’s sister Vera appears to have changed her name from Lina, who is found on the 1911 census described as a private nurse. Her card (“Miss V. Winter, C.M.B. – Trained nurse, midwife and masseuse (by exam)”)  is included in Edward’s service file.

Despite my fears that Edward’s ties to his family were tenuous, they were deeply concerned about his welfare. On 29 September 1916, just over a month after he died, his sister Vera wrote pleading for news of him. “The last I heard from him was the 11th of August, then about [illegible] Sept. I heard through a friend [illegible] he had been wounded,” he wrote. On the day he wrote, the Army issued a form letter stating that Edward was missing. Vera wrote again in October. “Can you give me any news respecting L/Cpl. E. Winter …I may mention he has been wounded and missing since August 21st 16. Anxiously awaiting any news.” Finally, there is a short and resigned note. By now the family can have had no expectations that he would be found: “I suppose there is still no further news of L/Cpl E. Winter.”