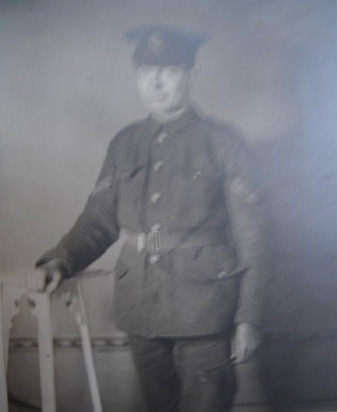 At the time he signed up on 7 August 1915, Ernest Austin Hoare was living with his family at 12 Lansdowne Gardens, Stockwell. He described his “Trade or calling” as “Chemist”.

After six months at the Albany Engineering Works, Hoare became assistant to Dr. Fyleman, an analytical chemist, of Victoria Street. He was so interested in this work that in September 1913 he decided to join The Borough Polytechnic Institute. When war broke out, his employer became works chemist at Osram’s lamp factory (this may have been the large complex at Wembley, north London)and Hoare went with him. In July 1915 he gained a scholarship at the Imperial College of Science and after gaining a promise that this would be held over for him on his return, joined the Royal Engineers.

There is not much service history for Hoare in the National Archives. However, one interesting document, bearing Hoare’s name, outlines the Army’s appeal for chemists:

Form 121/1/1 (A. G. 2B)
Men with training in Chemistry are required for service with the Royal Engineers overseas.

The particulars of service are as follows:

(1) Term of service will be for General Service for the duration of the War;
(2) Age 19 to 45 years;
(3) Ordinary standards of height and chest measurement will be waived provided the candidate is organically sound and fit for service in the field. The eyesight test may be passed with the aid of glasses;
(4) Men selected will be enlisted in the Royal Engineers and at once promoted Corporal;
(5) Pay will be 2/6 a day with 6d Engineer Pay, with the usual Separation and Dependants allowances under Army conditions. (Further promotion to the rank of Serjeant will be given to selected men in the field.)
If you are willing to enlist under these conditions you are requested to take this circular to the nearest Recruiting Officer, who is hereby directed to medically examine you, and, if you are passed fit, give you Army Form B. 178 (Medical History Sheet) and a railway warrant to London.
On arrival you should present yourself to the Chief Recruiting Staff Officer, Central Recruiting Officer, Great Scotland Yard, Whitehall, who will carry out your enlistment and despatch you to Chatham to be clothed and equipped.

After a month as a “pioneer” Hoare was promoted to Corporal. He embarked for France with the British Expeditionary Force on 16 August. He survived only until 21 December.

On 17 January 1917 Hoare’s father received a letter from the Records Office at Chatham:

Sir
Special information has been received with regard to the burial of your son the late Corporal E. A. Hoare R. E.

He was interred in Cambrin Churchyard on the 23rd of December last.

The village of Cambrin was only 800 yards (730 metres) from the front line trenches and the Extension, where Hoare is buried, was used for front line burials until February 1917. Hoare is in Grave ref J1.

In 1911 the Hoare family lived at 228 South Lambeth Road. John Hoare, 45, a police constable from Chatham, Kent, and Martha Hoare, 45, from Troston, Norfolk, had 4 children (all born in Sidcup, Kent, apart from Stanley and Leslie, who were born in South Lambeth):
May Hoare, 17, a sorter for the G.P.O. (General Post Office)
Jack Hoare, 16, an apprentice car body maker
Ernest Hoare, 13
Madge Hoare, 12
Stanley Hoare, 8
Leslie Hoare, 7
In addition, there were 2 boarders: Anne Watts Bray, 69, from Plymouth, and Ada Inwood, 33, a single dressmaker from Croydon.

Information from the 1901 census

In 1901, the Hoare family was living at 2 Cromer Villas in South Lambeth.

The picture of Hoare is taken from a presentation by Peter J. Leonard available on the St Olave’s School website at www.saintolaves.net. When you enter the site, click on ‘Welcome’ then on ‘Chaplaincy’ and scroll to the bottom. There is a thread on St Olaves at the Great War Forum.