Frederick David Shea, 22 in 1911, was a clerk in a grocery warehouse. He lived at 425 Forest Road, Walthamstow, east London in four rooms, which he shared with his mother, Frances Shea, 49, a widow from Clapham living on private income; sister Amelia Shea, 23, a booking clerk, born in Clapham; and brother George Shea, 14, born in Manor Park, east London. Ten years previously when Frederick Shea was a 12-year-old schoolboy, he lived with his grandmother, Amelia Coutirier, 67, a Clapham-born bookseller, at 209 Clapham Road, his uncle, Francis L. Coutirier, her 37-year-old married son described as a “bookseller’s assistant” and born in Newington, and his younger brother, George Shea, 14, born in Manor Park, Essex. 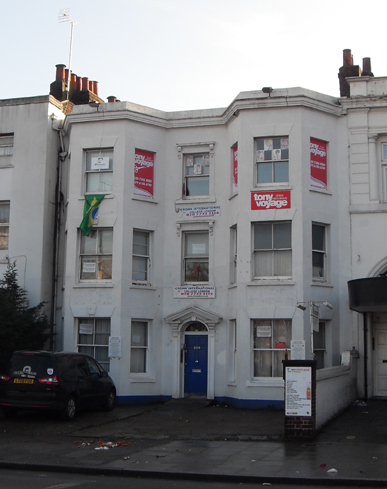 No. 209 Clapham Road, formerly The Bays or No. 2 Stockwell Common
“This is probably the oldest surviving house in Clapham Road, but unfortunately nothing has been discovered about its origin. It is a double-fronted house of three storeys, its painted stucco face clothing a front of mid or late 18th century date. The central doorway is surmounted by two windows and flanked on each side by a splay sided bay rising through the three storeys. The wood doorcase is of charming design, the arched opening being framed by panelled pilasters with consoles supporting an open triangular pediment. The front finishes with a cornice and blocking course.”