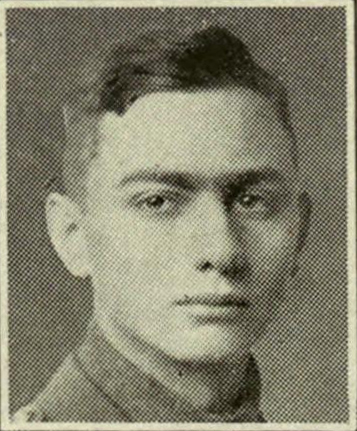 Frederick Howard Stewart Caiger was born on 23 September 1896, the only child of Dr Foord Caiger and his wife Madeline Orr Caiger. He was educated at Winchester and went up to Gonville and Caius College, Cambridge on 1 October 1915 where he resided for one term. His father, superintendent at South Western Hospital for 39 years, died on 5 September 1929. His obituary is available at the BMJ Archives. There is at least one branch of the Caiger family still living in Stockwell.

Caiger was born in 1896 and educated at Winchester (he was in the Officer Training Corps); he later went up to Gonville and Caius College, Cambridge on 1 October 1915 where he resided for one term.

He was gazetted in December 1915 (meaning that his Army commission was announced in the Gazette), embarked for France on 23 April the following year and was attached to the 36q Battery. Caiger was admitted to the 87th Field Ambulance with a hydrocele (fluid in the scrotum) and later to the General Hospital suffering from scabies. This highly infectious skin disease was caused by infection by the mange mite. He was discharged on 24 June and posted to the 92th Battery in September.

Caiger was killed by a high explosive shell near Flers on 11 November 1916 and was buried at McCormick’s Post. In 1920 the War Office wrote to his father: “I am to inform you that … it has been found necessary to exhume the bodies buried in certain areas. The body of Second Lieutenant F.H.S. Caiger has therefore been removed from McCormick’s Post Cemetery and re-buried in Caterpillar Valley Cemetery, Longueval.” 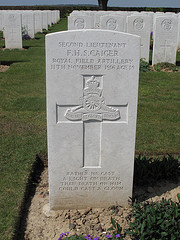 In 1922 Dr Foord Caiger donated the four-faced clock to the Stockwell War Memorial fund in memory of his son. “I… shall be very pleased to give it as a tribute to the memory of my only son, who fell in the battle of the Somme at the early age of 19.” he wrote to Samuel Bowller, secretary of the Memorial Committee. “The idea of placing a clock … struck me as such a ‘live’ and appropriate tribute to one who was born and always lived in Stockwell, and who entertained a warm affection for his home.”

Frederick Howard Stewart Caiger, a medical student at St. Thomas’s Hospital, London, was born on 23 September 1896, the only child of Dr. Frederick Foord Caiger and his wife Madeline Orr Caiger. The family lived on the premises of South Western Hospital (now Lambeth Hospital) on Landor Road, where Dr. Caiger was Superintendent for 39 years.