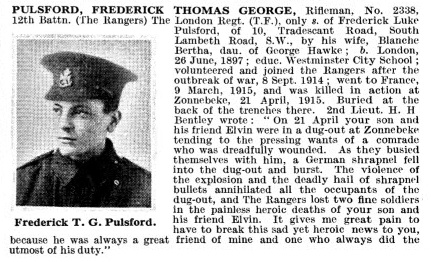 PULSFORD, FREDERICK THOMAS GEORGE, Rifleman, No. 2338, 12 Battn. (The Rangers) The London Regt. (T.F.), only s. of Frederick Luke Pulsford, of 10, Tradescant Road, South Lambeth Road, S.W., by his wife Blanche Bertha, dau. of George Hawke; b. London, 26 June, 1897; educ. Westminster City School; volunteered and joined the Rangers after the outbreak of war, 8 Sept., 1914; went to France, 9 March, 1915. Buried at the back of the trenches there. 2nd Lieut. H. H. Bentley wrote: “On 21 April your son and his friend Elvin were in a dug-out at Zonnebeke tending to the pressing wants of a comrade who was dreadfully wounded. As they busied themselves with him, a German shrapnel fell into the dug-out and burst. The violence of the explosion and the deadly hail of shrapnel bullets annihilated all the occupants of the dug-out, and The Rangers lost two fine soldiers in the painless heroic deaths of your son and his friend Elvin. It gives me great pain to have to break this sad yet heroic news to you, because he was always a great friend of mine and one who always did the utmost of his duty.”

In 1911 Frederick Pulsford, 13, was living with his parents, Frederick Luke Pulsford, 40, a designer and heraldic engraver born in Brixton, and his wife Blanche B. Pulsford, 38, from Saltash, Cornwall at 10 Tradescant Road, South Lambeth where the family occupied five rooms. He an his sister, May I. Pulsford, 10, were born in Lambeth. Mary A. Pulsford (nee Blonner), 82, mother of Frederick senior, was from Leominster, Herefordshire, lived with the family. The family had lived at this address since at least 1901. The 1891 census shows the widowed Mary A. Pulsford as a “corndealer”; her son Thomas Pulsford, 23, is a carpenter; Frederick Pulsford, 24, is apprenticed to a heraldry engraver; Lewis J. Pulsford is a corndealer like his mother, and living in the house with his wife, Minnie J. Pulsford, 24, and son Jack Pulsford, 3. The family then lived at 62 Whitcomb Street, St Anne Soho, London. Mary’s deceased husband was a builder, born in Dulverton, Somerset.