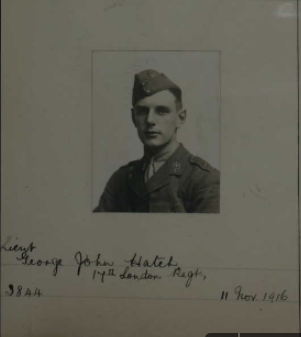 The Hatch family lived at 9 St Johns Road (now called St John’s Crescent), Brixton, where they had 11 rooms. George John Hatch’s father, John Cosens Hatch, was the manager of a vinegar brewery. We can speculate that this may have been Beaufoy’s Distillery on South Lambeth Road. John Hatch, 48 in 1911, was born in Stonehouse, Devon. His wife Maria Hatch, 49, was from Southwark. They had 4 children, all born in Lambeth:
Florence Hatch, 25
Hilda Hatch, 23
William E. Hatch, 19, a bank clerk
George John Hatch, 14
A nephew, 33-year-old George Foster, single and born in Peckham, also lived in the house, as did Violet Winter, a 21-year-old single domestic servant from Chelmsford, Essex.

Lt. George John Hatch (Nov 20, 1896 – April 6, 1917) was a WW1 Royal Flying Corps aerial reconnaissance pilot who was killed in action over Arras, France by German war ace Lieutenant Wilhelm Frankl. George’s death (and that of his observer Cpl Ernest Langridge) was part of the “Bloody April 1917” offensive along a 100-mile stretch of northern France. By the end of April, the British had lost 250 aircraft, and some 400 aircrew had become casualties.

George was born in Brixton, London in 1896; by 1911, his family moved to Stockwell. He attended City of London School, where he was a cadet in the Officers Training Corps. On Oct 1, 1914, George enlisted in the 17th (County of London) Battalion of the London Regiment (Poplar and Stepney Rifles), and was quickly promoted to 2nd Lieutenant. He was wounded in July 1915 at the Battle of Loos (Belgium).

Lt. Hatch volunteered to join the Royal Flying Corps (RFC) in October 1916, and completed his pilot training in November. On December 6, 1916, he was promoted as a Lieutenant and assigned to the 8th Squadron, headquartered in Bellevue, France. “The Squadron specialized in the Corps Reconnaissance role, carrying out contact patrols and artillery spotting in close cooperation with the army. The squadron flew in support of the Battle of the Somme in the summer of 1916 and the Battle of Arras in April–May 1917.”

George Hatch acquired his trench watch shortly after his promotion to the RFC; it is engraved “Lt. G. J. Hatch / RFC”. He used it continuously; the silver case is corroded and the original leather strap is well-worn. Hatch’s watch was acquired by Russ Cook (Basildon, Essex) in 2014 at a second-hand market: “I recently bought this trench watch at one such market. I am not an expert on these, but it felt right, and I was very taken with the very sad story that emerged when I read the accompanying paperwork. The box, with the watch had just been thrown in another larger box, as if it had just been discarded. On the case back is a dedication to an officer in the RFC, Lt. G. J. Hatch [Royal Flying Corps, precursor to the RAF], with a very old handwritten note giving the history of the young man, who tragically was killed in action 6/4/17….”

Lt Hatch and his observer, Cpl Ernest Langridge, were flying reconnaissance over the German lines near Arras, France in their Royal Aircraft Factory BE2e biplane (Serial # A2879) on the morning of April 6, 1917. “The BE2 was originally designed without any provision for armament.While some crews flew entirely unarmed, or perhaps carried service revolvers or automatic pistols, others armed themselves with hand-wielded rifles… this weaponry proved to be of questionable effectiveness. It was still necessary for the observer to be located over the center of gravity, in front of the pilot… In this awkward position, his view was poor, and the degree to which he could handle a camera (or, later, a gun) was hampered by the struts and wires supporting the center section of the top wing. In practice, the pilot of a B.E.2 almost always operated the camera, and the observer, when he was armed at all, had a rather poor field of fire to the rear, having, at best, to shoot back over his pilot’s head.”

Lt Wilhelm Frankl, commander of Jasta 4  (“Hunting Squadron”), had already shot down three British aircraft with his Albatros fighter plane during the early morning hours of  Friday, April 6, 1917. “At 09:30 Frankl was airborne again, this time to intercept a reconnaissance  plane from 8 Sqn RFC. After 25 minutes’ chase the British aircraft falls to the ground north-east of Boiry. The crew – Lt. G. J. Hatch and Cpl. E. Landridge – do not survive. It is the fourth victory scored on this day by Lt. Frankl…”

Lt. Frankl, son of a Jewish merchant, was one of Germany’s most honored Aces, with 20 confirmed kills. In 1916, he becomes the first and sole German pilot of Jewish descent to be awarded the Pour le Mérite. He was shot down and killed two days later on Easter Sunday 1917. “He was buried with due military honors at the Berlin-Charlottenburg cemetery… In the thirties, after the Nazi party gained power, Frankl’s name disappeared from the official lists of medal holders because of his Jewish nationality. Only forty years later, in 1973, was Frankl restored to the pantheon of German fighter ace.”

Lt George Hatch and Cpl. Ernest Landridge were buried at the Cabaret Rouge British Cemetery lies just south of the town of Souchez and 11.4 km. north of the center of Arras.

With grateful thanks to Robert Stokes for permission to use his research.