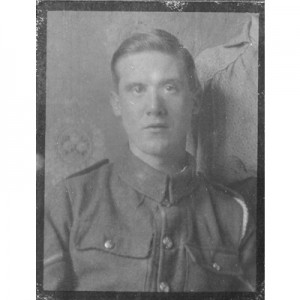 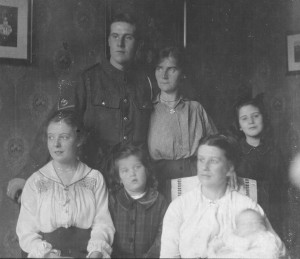 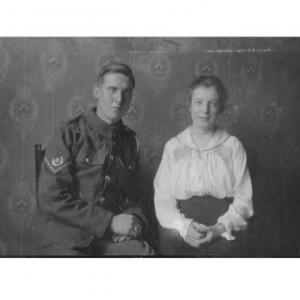 Harold and his sister Hettie (Henrietta) 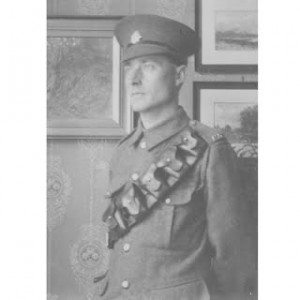 Information from the 1911 census
In 1911 the Hill family lived at 153 Trentham Street, Wandsworth, where they occupied 5 rooms. Joseph Snare Hill, 57, was an ornamental plasterer. He was born in Westminster. His second wife, Emma Elizabeth Hill, 55, was from Hanwell, Middlesex. Joseph Hill had a three children by a previous marriage to Sarah (Arthur Frank, Florence and Ethel Mary (who is on the census return for this address, aged 27, born in Clapham and working as a ledger clerk).
Joseph and Emma had 2 children surviving in 1911 (of 3):
Henrietta Emma Hill, 18, a compiling clerk, born in Wandsworth
Harold Joseph Hill, 14, a student, born in Wandsworth 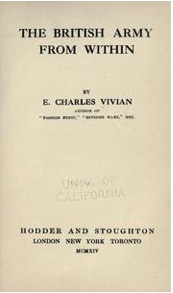 The British Army From Within

About 15 years ago, in the 50p box of an Oxfam shop on the Isle of Wight, Peter M-D found a copy of The British Army from Within by E. Charles Vivian, published around 1914, just as the Great War was starting. He bought it for the inscription alone.

Inside the front cover H H has been written in bold letters. Below, in a different handwriting, is “Harry got his wishes. Harry got one stripe. He got to fire the machine guns.”

Below that, in the same handwriting but different coloured ink, is “Harry got his name on the memorial in Stockwell.”

He felt compelled to find out more.

At that time, the vast resources of the internet were not available, so he went to Stockwell and made a list of all the names with the initials HH. Then he spent a day in the reading room of the Imperial War Museum and after a few hours found his man and solved the riddle.

“He had one stripe so was a lance corporal,” says Peter. “He fired a machine gun so had to be in the MGC – the Machine Gun Corps. His name was Harry. Lance Corporal Harold Joseph Hill MGC 4309 born May 17th 1896 died of wounds May 17th 1917. He is buried in Mont Huon Military Cemetery in Le Treport, France. I was in Normandy a few years ago and I went to pay my respects.”

“I found a reference giving the name of the base hospital where he died – near Le Treport – and that his mother was present at his death from gangrene. I made a note of it on paper, entered it onto my database, moved house four times, had hard drive failure – and the reference is lost. The hospital is easy, it was the one they built of wood and canvas near Le Treport. At the end of the war they took it down and all they left behind were the graves. When I visited, the cemetery was in a thousand-acre cabbage field miles away from anywhere.

“The book had been smoke damaged and then water damaged, so I suspect it had been in a house fire. Harry Hill lived in 32 Herbert Road, Stockwell, which I think was damaged during the Blitz so maybe that was the cause.”

Peter was told that Harry’s military records were destroyed during the Blitz along with 85 per cent of the Machine Gun Corps archives. However,
Harry’s service record has survived in the National Archives although, like many others, they are badly smoke and water damaged during a bombing raid. These records tell us more about Harry the person.

Harold Joseph Hill worked for the Admiralty as a clerk. On 13 November 1915, the day Hill volunteered, J. S. Barnes, Head of War Registry, wrote a careful note: “Mr. H. J. Hill has received permission to leave the Admiralty in order to elist in the army.” Later, on 9 December 1915, they made a request, which sets out all the possibilities for their former clerk, aside from survival: “43809 H. J. Hill. Please notify Admiralty in event of this man’s discharge, death etc, or of his being granted a commission or being reported missing or a prisoner of war.”

Harry’s records show that he was wounded in action on 6 May and was admitted to hospital with gunshot wounds to the abdomen, forearm and back the following day. He died 10 days later.

The records also show that Harry was, at 5 feet 5 inches (165cm), above average height and weighed 119lbs (54kg). His chest measurement was 33 inches (84cm), which he could expand 2 inches (5cm). He signed up at 9 Tufton Street, London SW1 (it is just behind Horseferry Parade). He had one sibling: Henrietta, 26, who lived at Herbert Road.

The 1901 census shows that the Hill family was then living at 23, Tonsley Road. Harry Hill’s father, Joseph Suare Hill, was a plasterer, born in Westminster in 1854. His mother, Emma, was born in Hanwell in 1856. Emma’s pension declaration of 18 April 1919 states that Harry had only one sibling – Henrietta, born in 1893 in Wandsworth. However, the census shows that he had two other siblings: Albert F. Hill, 19, a flour merchant’s clerk, born in Battersea in 1882, and Ethel M. Hill, 17, a tea merchant’s clerk, born in Clapham.

By 1911 the family had moved to 153 Trentham Street, Streatham, Joseph Suare Hill had died and Albert had left home or was otherwise absent from the house, Ethel was working as a ledger clerk, and Henrietta was now a “compiling clerk”. By 1911 his father, Joseph Suare Hill, was deceased.