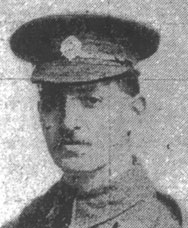 Information from the 1911 Census

Harold Dudley was a commercial clerk. In 1911, aged 24 and an only child, he was living with his parents, James Robert Dudley, 53, also a commercial clerk, and Charlotte Emily Dudley, 50, at 298 South Lambeth Road. James was born in Lambeth, as was his son Harold. Charlotte was from “London” (the census is not more specific).

In addition, the family had three boarders: George Hugh Willson, 24, born in London and working as a cashier; William James Cross, 22, a journalist born in Walthamstow, Essex; and Leonard Gainey, 22, a commercial traveller, from Niversfield, Sussex. On the night of the census the household had a visitor, Lillie Willson, 48, a hotel manageress born in Burgh Heath, Surrey, and presumably the mother of boarder George Hugh Willson.