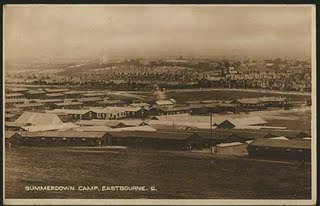 Harry Burvill was a 22-year-old storekeeper, living at 15 Hubert Grove, Stockwell. He attested on 27 March 1915 in London (the record is not specific about where). His physical development was judged to be “v. good” – 5 feet 9½ inches, with a 37 inch chest (which he could expand by an impressive 4 inches).

He was posted on 30 March 1915, and again on 18 January 1916. But despite his evident good health, he was admitted to the Countess of Lytton Hospital, London some time after that. His illness or condition is not recorded. On 1 February 1916 he was sent to Summerdown Convalescent Hospital, Eastbourne. Summerdown, which opened in April 1915, held 3,500 convalescing soldiers. Three weeks later, Burvill was granted furlough (leave) until 3 March, when he was declared fit.

Harry Burvill is on the 1911 census as a 19-year-old  “wharf scaleman” living with his parents and brother at 35 Walpole Road, Deptford. His father, Harry, 67, was a “butcher scaleman”, born at Ramsgate, Kent and his mother, 68, was born in Walworth. Charlie Burvill, 17, was a draper’s assistant. Both boys were born in Kilburn.