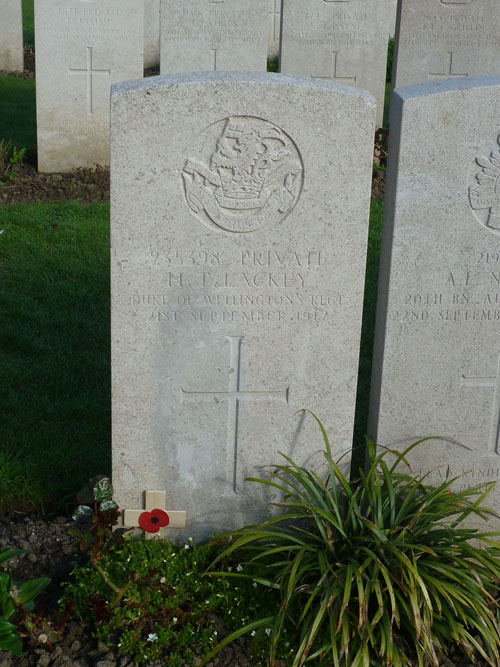 LACKEY, H. T., Private, 10th Duke of Wellington’s (West Riding Regiment).
He joined in September 1916, and in the following year was sent to the Western Front. He served with his Battalion in many parts of the line and fought at the Battles of the Somme and Ypres, and was severely wounded at the Menin Road. Unhappily he died from effects of his wounds on September 21st, 1917, and was buried in Passchendaele Cemetery. He was entitled to the General Service and Victory Medals.
“Thinking that remembrance, though unspoken, may reach him where he sleeps.”
6, Mary’s Cottages, Eastcote Street, Stockwell, S.W.9.

The information from the census is confusing. There was a Lackey family living in 6 rooms at 9 Industry Terrace, Brixton, that included Henry Lackey, 27, a carman born in Brixton. The household consisted of George Lackey, 48, a general carrier’s carman from Walworth, and Louisa Lackey, 44, from Bankside, Southwark. They stated that they had 7 children: Ellen Lackey, 19; Thomas Lackey, 17, and John Lackey, 15, both greengrocer’s assistants; Rose Lackey, 13; Joseph Lackey, 11; another Henry Lackey, 6; James Lackey, 3. All were born in Brixton except the younger Henry. It looks like the enumerator has made a mistake and described the older Henry Laskey as a son of George and Louisa (perhaps he was a nephew).

There is also a discrepancy between place of birth for Henry. The Soldiers Died in the Great War database gives this as Walworth; this Henry was born in Brixton.

This family provided a testimonial for greengrocer’s assistant Albert Laskey when he joined the Army in 1909.