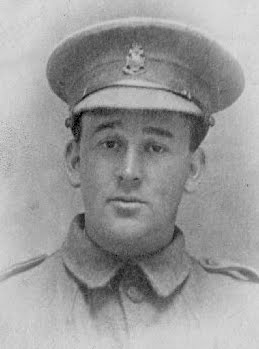 Herbert John Wild’s attempts to find out what happened to his two dead sons, Herbert William Wild and Reuben Edward Wild, and the whereabouts of their bodies have survived in the files. They are business-like and to the point, but they make difficult reading nonetheless. His sense of frustration with the dearth of information coming from the Army and his grief for his boys bubbles just below the surface.

The four eldest Wild boys, Herbert, John, Reuben and Edward, served in the war. Cicero, aged 8 in 1914, was too young. The first sign of trouble was in September 1915. “Could you give me any information concerning my son who I have not heard from for 3 weeks,” wrote Annie Wild, enquiring about Reuben, in October 1915. The Army, it appears, had not yet told her that her son was missing in action. The letter is annotated “No report on hand.”

The mystery of what happened to soldiers reported as missing or whose effects were not located caused deep distress to the bereaved families. For the most part they could not know or comprehend the conditions their sons were fighting in or imagine the scale of the slaughter; they could not appreciate how, amid the mud and chaos, their sons’ bodies could seem to simply disappear.

The Wild family, however, persisted in trying to find answers. Herbert John Wild wrote pressing for more details on his son Reuben’s fate. Reuben died in the Battle of Loos.

The first letter in the file is from 10 September 1916, nearly a year after Reuben died. “In answer to your letter regarding my son’s death on 25/9/15, will you kindly inform me of how he met his death and also the name of the place ,” he wrote. He was anxious also about proving that his son was dead for the insurance company.

In fact, there was in the file two reports on the circumstances of Reuben’s death. Form B 104-53 (Inside Sheet) includes a transcription of a statement given by Rifleman McMeahon:

“Wild is another chum of mine and he [went] missing 25/9/15. I asked a man called Pte. C. Taylor whose number I forget but he is in C Coy. [Company] 11 Platoon and he told me he saw Pte. Wild wounded in the shoulder in the second line of German trenches at the Railway at Ypres and he asked him to go back with him but he would not. The Capt. called one of them to go back with him so Taylor went on to the third line with the Capt. and left Wild in the trench. I understand they were driven back to the 2nd, line where Pte. Wild was wounded but he has been missing ever since.”

There was another report, from Pte. J. Taylor:

“Wild was a short fair [man] about 19. He had no moustache. I saw him dead in the trench killed by a bomb. There was no time to bury him.”

The files do not record whether this information was passed on to the family. On 3 April 1920, however, after receiving Reuben’s medals, Herbert John Wild, wrote” I had four sons serving in the Great War. Two of them sacrificed their lives and I have never received any good information as to where they were killed or buried.” This letter is very badly damaged and therefore difficult to read. However, I can make out the words “I intend to go to Belgium or France … If you would kindly … the name of the place …son R. Wild was last seen alive I shall be grateful to you. … My other son was killed in the Battle of the Somme 1916 …several times by the Graves Commission but up to now I have not received any.” Herbert’s words indicate that the family remained in ignorance.The “other son” was Herbert William Wild, who was killed in action on 15 September 1916, nearly a year after Reuben’s death. He was married to Polly Lily May Wild and had a baby daughter, Ivy May Wild, born 6 February 1916. A note in William’s file says that his personal effects were posted in 1917 but in November 1917 his grieving father wrote:

“My daughter in law [Polly] informs me that she has received no effects of her Husband the late Rifleman H. W. Wild … who has been dead 14 months. All she has received is his identification disc. I myself have the official information of where he was buried… If he was buried [illegible] possible to recover his identication disc it must also be possible to recover any other personal effects. I have lost two sons in this war and have two others serving. … I have nothing at all to prove the other son’s death [Reuben] as he was reported missing after the Battle of Loos.”

In 1911 Herbert William Wild, 22, a shop assistant, and his brother Reuben Edward Wild, 15, an errand boy, lived at 24 Halstead Street, Brixton. Their father, Herbert John Wild, 42, was a gas slot meter collector from Lambeth; their mother, Annie Wild, 42, was from Southwark. There were three other sons: John L. Wild (he is not on the 1911 census return, but he does appear on the 1901), Edward A. Wild, 11, and Cicero C. Wild, 5. The family shared four rooms. The family was found at this address in 1901. Reuben was born in Battersea, his siblings in Lambeth.
Previous Post
A. E. Wickes
Next Post
Reuben Edward Wild