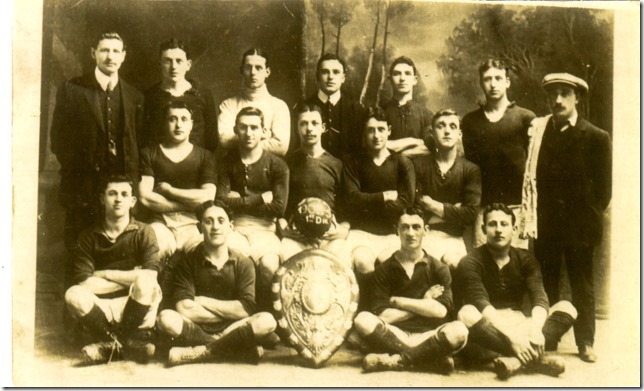 Hyman Lubel is seated to the left of the shield

Hyman Lubel was born in  Mile End  in about 1894 the eldest of five children who were orphaned at an early age in approx. 1906. He took over responsibility of bringing up his younger siblings in very tough times in relative poverty. Nevertheless he was very sporty and active in the Brady Club of Whitechapel. He is second from left in front row in 1900.

Just before the Great War he moved to South London and began a small printing company. He was called up and lost his life towards the end of the war. I have his last handwritten letter from him written in the trenches shortly before his death. My own grandfather served in the Suffolk Regiment & survived the war after which he took over the business in South London. I understand never got over the terms with the death of his older brother and died in 1946.

A sad tale of a poor East End kid dead for King and Country at 23. 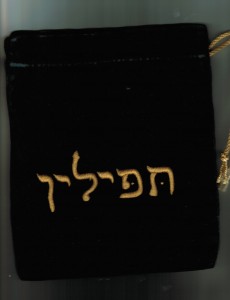 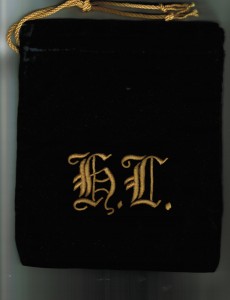 The bag was embroidered with his initials 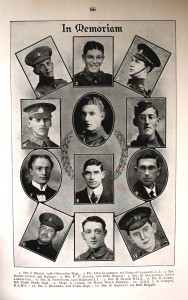 This is Lubel’s letter to his sister Yetta.

Thank you very much for your letter dated 21st. & received this evening, which was the more welcome in that it was unexpected. As you say, one was long due from you.

I notice you say you have to be satisfied with the little that Beck reads to you now & then from my letters. You should not mind this for really it is most difficult to manufacture news where the life lead is most monotonous in its —– particularly when applied to the exciting escapes & glories of war, but is true all the same. As a matter of fact it is very seldom that I write anything in the way of news to Beck. I never write her of what does go on up the line, conditions, privations etc etc, neither do I ever let her know —– – from my letter – that shells, wounds & such like are the usual accompaniment to breakfast, dinner & tea. It wouldn’t do. She couldn’t stand it. No man out here writes his wife of these things. Their burden, especially now, is quite heavy enough without adding to the [existing?] torture. I did once write her —- a nasty strafe I was in for a whole day on the 30th Dec, but only because I was able to follow on with some assurances that it would not occur in the future as I was being attached to the —- —- & would hear & see shells no more. To you & John I can say rather more than this. You can stand it better. The new job is far better than being with the —- it is true but I am right in the thick of it just the same. When I get back from the line I am however assured of a comfortable night’s rest and have various conveniences altogether denied to the infantryman staying in the line, that is all. I am still with shellfire. Seeing that I haven’t written you for so long you will certainly expect some special news for yourself. I will give some little idea of two days’ programme, yesterday’s and today’s. In no case is there the slightest exaggeration. It is merely a part of what many go thro’ daily “up the line” on the Western Front.

28/1/18 I start out on my round early this morning. Carrying a basket packed with many tins of cigarettes, tinned foods, chocolate sweets etc etc. Slung over my shoulder I carry a large bag containing 150 packets of biscuits. The whole makes a fairly heavy load to take up to the “line”, some 5 to 8 kilometres distant. With box respirator (protection against gas attack) at the “alert” position & steel helmet on, I am ready for anything. I have gone, 1 to 11/2 kilometres when I reach a valley named X which runs either side of the road. I don’t like this spot for there are several batteries of artillery all along the valley & batteries always draw shellfire. Sooner or later they are located by aircraft & strafed unmercifully. Just nearby is an RAMC Aid Post and a wounded man is being carried to it when “whee-ew,” “whee-ew-zlimp” out from nowhere & suddenly one of Fritz’s big “black ones” comes crashing down & bursts about 12 yards from the stretcher-bearing party, and about 40 yards from where I am. Everybody (— labor party is just passing by) instinctively ducks for when an 8 inch shell drops, shrapnel & earth are flying all over the place. Luckily nobody is hurt – which is really wonderful – though bits of earth & tiny bits of shrapnel hit your helmet. But where one shell drops, more usually follow so we all make for cover, the protection of the slopes banking the valley being about the best. The second shell follows quickly enough but like me drops into the valley but, fortunately, not on the same spot. Fritz is undoubtedly searching for the guns & once this happens he may continue for 2 hours, or just send two or three shells over. Well, he sent many, some dangerously near & the earth is really flying all about the place. What with slipping & stumbling & falling with my load & ducking [?] I felt pretty relieved to reach an artillery sap about 100 yards away, where I could consider myself fairly safe. The sap was crowded when I reached it so I left my goods at the entrance & got in. Well we daren’t move out for quite two hours, for the shells were plonking all round us. My companion (he sells newspapers) took refuge in a dugout used as a cookhouse. A lump of shrapnel burst through our roof & knocked a camp kettle clean off the fire. Luckily no one hurt but everyone shifts out pretty quickly.
[Fritz is bombing overhead so I had better put the light out & go to bed & continue this tomorrow]

To continue When things appear to have quieted down I cleared out, proceeded on my round, sold out & got back. Shells were whistling overhead now & then as usual for the rest of the journey tis true, but this is nothing & I only had to duck twice till I got back. Well, all the boys felt quite sure I had been hit & were on the point of enquiring of the Aid Post if I had been brought in. Well, we will call that day finished.
29/1/18 Started out as usual & carried on. Nothing particular – just one or two odd shells – till I was on my way back. I was particularly anxious to avoid the road in that part of the valley already mentioned as they were heavily shelling the batteries on the left, so I made a wide detour to the right. This took me well away for when I made for the road again I found I had to go about 3000 yards across country to get to it. Well, Jerry (Fritz) started to shell the ground in front of me, about 200 yards [away]. I waited a minute to see exactly what he meant to do. He ranged from straight in front to about 300 yards half eight for about 5 minutes, so I decided to move forwards but somewhat to the left, though it meant going farther out of my way. As I shifted so Jerry shifted, so I decided after a slight wait to go to the right again. Jerry did the same & then started quite a barrage all along my front, left & right. I dropped to the ground & waited for about a quarter of an hour, till he had calmed down somewhat & then decided that the best thing was to go straight forward. He was then sending them over at about one a minute and as a big shell always gave timely warning by its peculiar whistle I ducked when necessary & went on again. When I got to the ground about where he had been shelling I saw it was a ridge at the back of which was a valley where we had evidently had a battery of guns previously for gunpits & dugouts ran all along. Just as I dropped over the ridge & down the slope Jerry started again & in earnest this time. They came thick & fast all around. I was hunched up at the bottom of the bank wondering when mine was coming for one had pitched just 10 yards in front. Well I had the wind up badly; to describe it is quite impossible. To get to the opposite bank up the slope & over the ridge looked a matter of about 60 yards. To move about was risky, but to stay where I was seemed worse so I decided to make a dash for it. Well I went for it, hell for leather. I found I had to go much further to get over the ridge into the next fall in the ground but managed it safely & sank down to regain my breath, for the spurt had taken all the wind out of me. I still carried my basket & bay. But Jerry was only mocking at & playing with me & seemed to be doing so for he had driven me on to a battery again, possibly the same battery that had shifted from the dip I had just left. Well I made haste to get out of this. Batteries, battery positions & shells are getting on my nerves now & when to cap it all Jerry lifted his range & started [to] shell this battery I felt like going to pieces altogether. I felt madly inclined to run wild. Luckily I didn’t but instead of stopping to duck, or commencing to run I decided to walk straight for the road, quickly making up my mind that if I was to be hit, I would be, if not I would walk safely out of range. As I walked I could hear the screaming of the shells & the shock of the explosion, but daren’t turn round although they seemed to be coming straight at me. Jerry followed me no further however than the battery and when I had gone about 400 to 500 yards & was within 20 yards of the road I turned round. Yes the shells were still dropping round the battery, tearing up great holes in the ground with every crash & sending up lumps of earth into the air. I felt much better now & stopped to sell my last tin of cigarettes to an artillery cook. As I was speaking to him a piece of shrapnel came with a thud on the ground between us, bounced against the cookhouse door post & fell to the ground. It was Jerry’s reminder to me that a piece like that (even a jagged piece of metal about [ends]