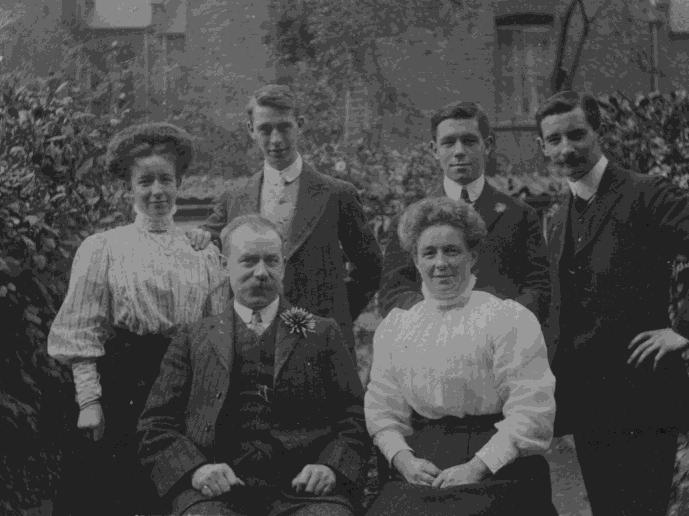 In 1911, Lambeth-born 22-year-old clerk Oscar Albert Taylor lived at 41 Landor Road, Stockwell with his parents, Albert WIliam Taylor, 52, a joiner from Hockering, Norfolk, and Rose Taylor, 47, from Hackney. There were four surviving children (of six): Mabel Maud Taylor, 26, a milliner; Eric William Taylor, 24, a joiner; Oscar; Henry Oswald Taylor, 18, a clerical assistant. Albert’s father William Taylor, 79, a widowed retired gamekeeper from Hockering, lived with the family as did Maud Mary Gladman, 29, a single shop assistant from Brighton. The household had six rooms, and the family had lived at that address since at least 1901.

Sarah Mackay has kindly shared her information about her great-uncle.

Oscar Albert Taylor, born 21 September 1889, was the third child of Rose and Albert (known as Alfred) Taylor. At the time of his birth, his sister Mabel Maud was four years old and his brother Eric William was two. A fourth child, Henry Oswald, was born in 1893. Oscar’s father signed his name ‘Alfred W. Taylor, Atheist and Socialist.’ He was a cabinetmaker who made musical instruments and grew dahlias in his spare time. Rose had been in domestic service before her marriage to Alf.

In the 1911 census, Oscar’s occupation is given as Clerk and Turf Accountant Worker. Henry was working as a clerk for London County Council, Eric was a joiner and building worker and Mabel was a milliner. Also living with the family was Alf’s father, William Taylor, a retired head gamekeeper. There was also a boarder, Maud Mary Gladman who was a shop assistant and drapery worker. Oscar joined up in 1914 and married his sweetheart, Ethel Andrews, while on leave in 1915, returning to duty with no time for a honeymoon. In 1911, Ethel was living at 129 Blackshaw Road, Tooting with her older sister, Emily (Em) and Emily’s husband, Ernest Hargreaves. Emily and Ernest had a daughter, Doris. Ethel worked as a shop assistant in a laundry. In the earlier 1901 census, although Ethel was not then living with her sister, the Hargreaves were living at 41 Landor Road with the Taylors which is presumably how the families got to know each other.
Postscript: Oscar’s sister Mabel died in the 1919 Spanish flu epidemic. Alf encouraged Oscar’s widow Ethel and Mabel’s widower Harry to marry, which they did in 1920. I remember as a child asking Granny (Ethel) what Oscar was like – her face lit up with a smile and she said ‘Oh, he was lovely’. By Sarah Mackay, daughter of Hilda Mackay nee Archer, born 1915 (Oscar’s niece and the daughter of Harry and Mabel), with grateful thanks to Rosalind Gold for her invaluable assistance.