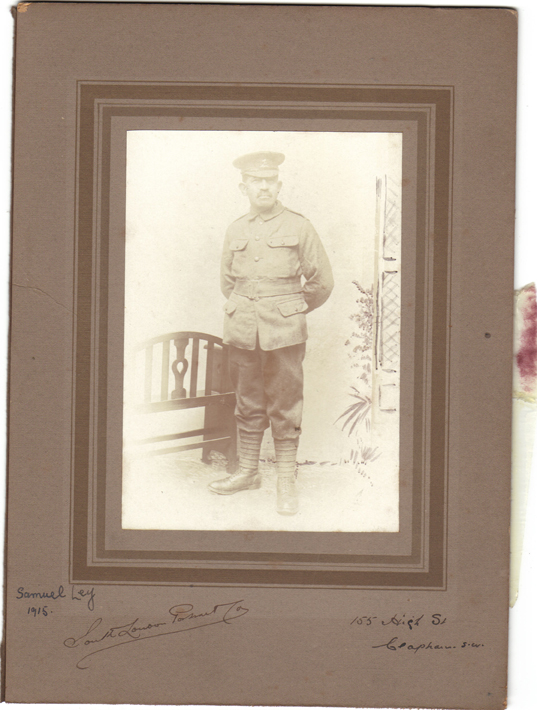 A desperate wife tries to get her husband home from France

In 1917, when Samuel Levy was 44, he volunteered to fight Germany for King and country. He left his wife, Pauline (nee Neuberger), and their eight children to cope without him, presumably managing on a proportion of his army pay. His civilian occupation, tailor’s cutter, cannot have brought much in but now they were having to manage on less while Samuel was a private with the Royal West Kent Regiment and later when he was attached to the Royal Engineers and sent to France.

Still, it wasn’t money that worried Pauline. It was the lack of fatherly discipline for her boys.

In October 1917, five months after Samuel signed up, Pauline had had enough. “To the Officer in Commands,” she wrote in a beautiful hand, “…I am making an application to know if it is possible to have my husband transferred from France now on active service there.” Through her little mistakes in English and the way she frames her sentences you can hear the cadences of her Jewish background.

She certainly had her hands full. “I have been left with eight children, five of which are boys, four going to school. They are getting over bearing and need a father’s hand.”

“My husband is 45 years old,” she stated. Her exasperation is audible – what was the man thinking, signing up at his age? “Do you think it possible for him to get some duty nearer home. I may also add that my husband joined voluntary.”

The answer, when it came a little over four weeks later, was blunt and stiffly expressed: “I am directed to inform you,” said the Colonel, “that if your husband is desirous, on account of age, of being posted to a Home Service unit, he must make an application to his Commanding Officer. I am afraid that he can not be brought home to look after his children.”

After I read this, I was quite surprised to see in the records that the Army took Pauline’s plea seriously. The Army Pay Office asked an “E. G. Potter” to investigate. Visitors judged Pauline’s home to be “nicely kept” and said the children were “well cared for”. Pauline was not forthcoming enough on why she found the children unmanageable, merely telling her visitors that “with as many boys, her husband ought to have a chance to work in England.” They talked to the headmaster of the boys’ school, who had no complaints and said the boys were not naughty. He had noticed no change in their behaviour when Samuel went to war. However, the general feeling was that Mrs Levy was a “superior woman and one who should have every consideration.”

I cannot tell you what happened next, only that Samuel was demobbed on 3 March 1919 and given a conditional pension. He was described as 60% disabled (neurasthenia, aggravated by the war) and awarded 24 shillings for him, and 24 shillings and 11 pence for his wife and children.