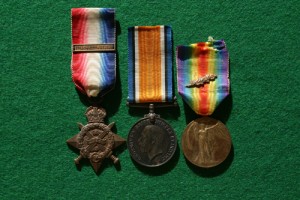 “I have the campaign medals to Sgt Jetten listed on the Stockwell War Memorial. Alas his Military Medal “for bravery in the field” has become detached from the group through the passage of time. Jetten is listed in the London Gazette a couple of times once for the MM and another for an MiD although his name is sometimes spelt incorrectly as Jetton.”

In 1911 Stephen Jetten, 22, was a serving soldier (a private) with 3rd Battalion of the Royal Fusiliers, at Vacoas, Mauritius. His widowed mother, Mary, from Wych, Hampshire, lived with 2 sons, Frederick, 23, and Richard, 9, at 78 Paradise Road, Stockwell.
Ten years previously, in 1901, Stephen Jetten, 11, lived with his parents, Charles Jetten, 42, a railway porter from Isington, Hampshire, and Mary A. Jetten, at 23 Luscombe Street, South Lambeth. There were eight children:
Erwin W. Jetten, 18, an engine cleaner
Frederick C. Jetten, 13, an oil shop assistant
Stephen E. Jetten, 11
Charles F. Jetten, 10
Lilian M. Jetten, 7
Herbert W. Jetten, 4
Ethel C. Jetten, 1
William Jetten, 16, a family member born in Isington, Hampshire (as was Charles Jetten), boarded with the family and worked as an engine cleaner.
Luscombe Street has disappeared, but there is a Luscombe Way just off Wyvil Road.