Thomas Percy Messenger, a 15-year-old grocer’s errand boy, lived at 46 Horace Street, Stockwell, where his family occupied four rooms. His father, John Messenger, 56, a wood and coal merchant from Ashton Keynes, Wiltshire, and mother Elizabeth Messenger, 52, from Blackheath, south-east London, had 13 children, all of whom survived. Five were listed on the census:
Thomas Messenger, 15
Jane Messenger, 13
Cecil Messenger, 11
[Indecipherable] Messenger, 9 -see  below
Walter Messenger, 3
All were born in South Lambeth.
In 1901 the family lived at 4 Assaye Street, Lambeth. 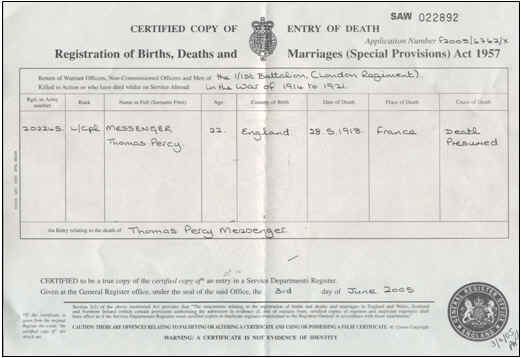 Regarding your entry for THOMAS PERCY MESSENGER, who was my great uncle, the name which you have listed as indecipherable is VICTOR.

I am a genealogist researching both my father’s and mother’s families.  I don’t know if the following is of interest to you, but I must tell you that I was overjoyed to see Tom included in your book.  I have informed all the Messenger relatives with whom I am in touch, and they are equally overjoyed. Though my great grandfather John has recorded on the 1911 Census record which you have quoted, that his wife Elizabeth (known as Lizzie) was born in Blackheath, actually she wasn’t!  She was born in Greenwich at 1 Luton Place, but was baptised in Collingbourne Kingston, Wiltshire, where her family lived and she grew up.  John Messenger was born in Inglesham, Wiltshire, not Ashton Keynes as he stated on the 1911 Census.  My great grandfather actually did not know where he was born, and usually said Cricklade! His family moved to Marlborough from where John walked through the Savernake Forest to court his Lizzie (nee Goddard)!

This is the entry I have in my family history for Thomas Messenger:

Thomas (Tom) Percy Messenger. Tom was born in Lambeth in 1895 (Civil Register: September quarter 1895, Lambeth, vol 1d, page 461).  He was baptised on 5th September 1895 at St Anne’s, South Lambeth.  On the 1911 Census, he was recorded by his father as living at home aged 15, an errand boy for a grocer.  He became a chef, then joined the First Battalion of the London Regiment during World War 1 and went to France.   He was awarded the Victory Medal and the British War Medal and, at the time of his death, had attained the rank of Lance Corporal.  He went missing, presumed dead, on 28.05.1918 when only 22 years old. His name is recorded on the Stockwell Memorial.

Lin Marshall nee Messenger) discovered that Tom’s name was not included on the War Graves Commission’s Roll of Honour on the Internet and wrote asking to have it included, furnishing the necessary documentation as proof.  After some months, she was notified that all the records had been checked and he was now included, and also that his name was to be added to the memorial at Soissons in France, the memorial closest to where he had fallen.”