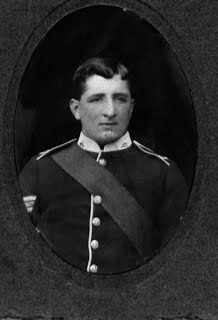 In 1911 William Franklin (given as “Franklyn” on the census return) Bartlett was a Sergeant in the Bedfordshire Regiment at Stanhope Lines, Aldershot, Hampshire. His birthplace is listed as Kennington. He was 32.

Information from the 1891 census

William F. Bartlett’s father, also called William was a wood carver from Cowley, Middlesex. In 1891, aged 45, he lived with his wife Elizabeth, 36 and born in Chelsea, London, four children (of whom William F. was one), and mother-in-law, 79-year-old Plymouth-born Elizabeth Upcott at 41 St Marys Square, Lambeth.