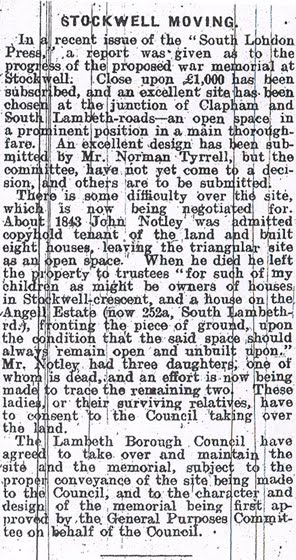 On 29 August 1919 the South London Press updated the readership on progress on the Stockwell War Memorial, which was independently commissioned. At this stage, the site – the “Triangle” at the junction of South Lambeth Road and Clapham Road, on the last vestige of the old Stockwell Common – has been chosen. Lambeth Borough Council will be responsible for the upkeep of the memorial as long as it has approved the design.

STOCKWELL MOVING.
In a recent issue of the “South London Press,” a report was given as to the progress of the proposed war memorial at Stockwell. Close upon £1,000 has been subscribed, with an excellent site has been chosen at the junction of Clapham and South Lambeth-roads – an open space in the prominent position in a main thoroughfare. An excellent design has been submitted by Mr. Normal Tyrrel, but the committee have not yet come to the decision, and others are to be submitted.

There is some difficulty over the site, which is now being negotiated for. About 1843 John Notley was admitted copyhold tenant of the land and built eight houses, leaving the triangular site as an open space. When he died he left the property to trustees “for such of my children as might be owners of houses in Stockwell-crescent, and a house on the Angell Estate (now 252a, South Lambeth-rd.), fronting the piece of ground, upon the condition that the said space should always remain open and unbuilt upon.” Mr. Notley had three daughters, one of whom is dead, and an effort is now being made to trace the remaining two. These ladies, or their surviving relatives, have to consent to the Council taking over the land.

The Lambeth Borough Council have agreed to take over and maintain the site and the memorial, subject to the proper conveyance of the site being made ot the Council and to the character and design of the memorial being first approved by the General Purpose Committee on behalf of the Council.