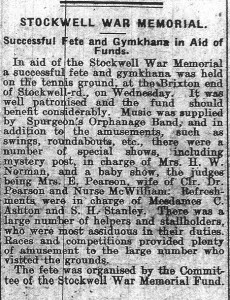 In mid 1920, despite appeals and the presence of Princess Beatrice at a bazaar in aid of the Erection Fund, the Memorial Committee had still not raised enough money to build the memorial. They widened their efforts to include a fete and gymkhana at the Stockwell Road tennis grounds.

STOCKWELL WAR MEMORIAL.
Successful Fete and Gymkhana in Aid of Funds.
In aid of the Stockwell War Memorial a successful fete and gymkhana was held on the tennis ground, a the Brixton end of Stockwell-rd., on Wednesday. It was well patronised and the fund should benefit considerably. Music was supplied by Spurgeon’s Orphanage Band, and in addition to the amusements, such as swings, roundabouts, etc., there were a number of special shows, including a mystery post, in charge of Mrs. H. W. Norman, and a baby show, the judges being Mrs. E. Pearson and Nurse McWilliam. Refreshments were in charge of Mesdames C. Ashton and S. H. Stanley. There was a large number of helpers and stallholders, who were most assiduous in their duties. Races and competitions provided plenty of amusement to the large number who visited the grounds.

The fete was organised by the Committee of the Stockwell War Memorial Fund.