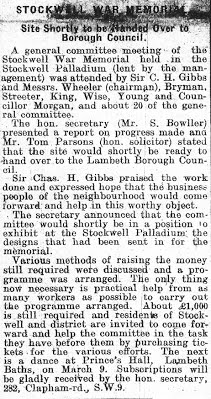 The South London Press published this story on 6 February 1920. The legal issues surrounding the handover of the site to Lambeth Borough Council had been resolved and it would shortly be handed over.

Site Shortly to be Handed Over to Borough Council

The hon. secretary (Mr. S. Bowller) presented a report on progress made and Mr. Tom Parsons (hon. solicitor) stated that the site would shortly be ready to hand over to the Lambeth Borough Council.

Sir Chas. H. Gibbs praised the work done and expressed hope that the business people of the neighbourhood would come forward and help in this worthy object.

The secretary announced that the committee would shortly be in a position to exhibit at the Stockwell Palladium the designs that had been sent in for the memorial.

Various methods of raising the money still required were discussed and a programme was arranged. The only thing now necessary is practical help from as many workers as possible to carry out the programme arranged. About 1,000 is still required and residents of Stockwell and district are invited to come forward and help the committee in the task they have before them of purchasing tickets for the various efforts. The next is a dance at Prince’s Hall, Lambeth Baths, on March 9. Subscriptions will be gladly received by the hon. secretary, 282, Clapham-rd., S.W.9.

We managed to grab this photo of the Cleaver Square Jubilee party this weekend, but if anyone has any other photos of Lambeth Jubilee parties, please send them to archives@lambeth.gov.uk . Thanks.

Friends of Stockwell War Memorial@stockwellWM·
30 May