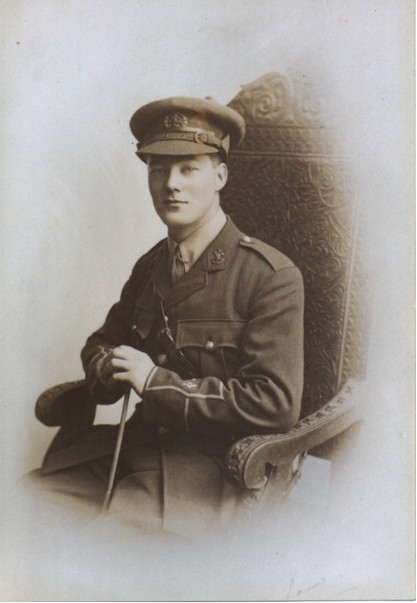 Conrad O’Neill Daunt. Photo by kind permission of Will Daunt

Conrad Daunt appears to have been listed as Canadian – at least he is remembered as so on the Veterans Affairs Canada website. The RAF was established late in the war (1 April 1918).

Conrad O’Neill Daunt, born in 1891, and his brother Giles Vellacott Daunt, born in 1895, were two of five children of Irish physician and surgeon Francis Eldon Horsford Daunt and Annie Elizabeth Daunt (née Vellacott) of 176 Clapham Road. Both boys were educated at City of London School.

Conrad returned to England from Canada to fight in the war and initially served as a Private with the Second Canadian contingent. He was offered a commission with the South Lancashires, and served with them through 1917. In 1918 he was transferred to the Royal Air Force (established in April) and promoted to Lieutenant.

Will Daunt, great-nephew to Giles and Conrad, writes: “Conrad and Giles Daunt were my great uncles, and, although we knew where they were buried (and have visited Conrad’s grave), we had not realised their names were on the memorial. My grandfather, Francis O’Neill Daunt, was their elder brother and, as a doctor (like his father), was probably a little safer (although he met mygrandmother on a hospital ship coming back from Gallipoli). Sadly, I never knew him because he died in the early 1950s. His two sisters, known as Dorothy and Peg, never married and, like him, spent most of their adult lives in Hastings/St. Leonards.”

In 1911 Conrad O’Neill Daunt was living with his uncle, Walter John Vellacott at his farm at Tunnel House, West Thurrock, Essex. Walter Vellacott, 32, was born in Barnstaple, Devon. His wife, Elizabeth, 27 was from High Bickington, Devon. They had 2 children: Margaret Annie Vellacott, 4, born in Homehurst, Esex, and William Walter Vellacott, 7 months, born at West Thurrock. Conrad was 20 and working as a farm pupil. There was a visitor on the night of the census: Moss T. Reick, 44 and married, an evangelist from Berlin, Germany. The servants were Annie Suckling, a single 21-year-old domestic servant from Essex, and governess Ruth Florence Reynolds, 32, single and born in Singapore.